THE SMOLYAN REGION’S YOUTH DISCUSSED THEIR VISION FOR THE YOUTH POLICIES ON A CONFERENCE OF THE FUTURE, ORGANIZED BY ECOWORLD RHODOPI ASSOCIATION

Young people from Smolyan Region participated in a Conference of the Future, which was held in the frame of the “Sustainable NGOs for adequate youth policy” project with project number BG05/615, financed by the NGO Programme in Bulgaria under the EEA Financial mechanism 2009 – 2014.

The Conference was opened by the Deputy Regional Governor of Smolyan Region Mr. Andreyan Petrov. He, together with the Director of the Regional Inspectorate of the Ministry of Education Mr. Ivan Mutsevski, the President of CITUB- Smolyan Mr. Todor Kapitanov, The Chairman of the Smolyan’s City Council Mr. Filip Topov, municipal councilors, municipal officials from different municipalities of Smolyan Region, representatives of NGOs, journalists, shared and discussed their vision for youth policies at the municipal and regional level.

The heavy snow did not stop the young people in their active participation. They reported timeliness of this conference and shared the useful knowledge obtained during the trainings held in the frame of the project.

On their turn, servants responsible for the forming of youth policies guaranteed support of young people’s ideas and initiatives.

The role of NGOs to enable young people to participate in the life of their local community was considered during the Conference.

At the end of the Conference participants recognized the need for such meetings and promised themselves to put the beginning of regular direct communication between youth and the ones responsible for the youth policies. 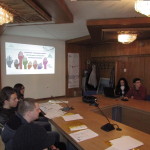 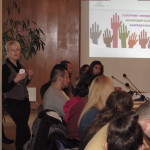 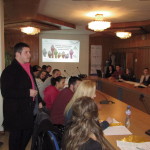